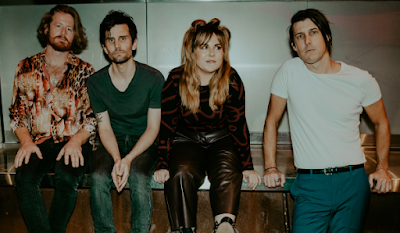 Doing the grandeur rock track justice, the music video directed by Re ne features the band in all of their stadium rock glory, laying down the nostalgic indie-rock riffs in the ambient lit Johnny Ma studios. Embellished by an array of dreamy camera-work magic, the band and their metallicy reflections are captured through a hanging perspex sheet. The bands keys player, Emma Adams, states:

“That iridescent perspex was laying in the roadside collection a couple of houses down from the studio we shot at, one of the guys carried it back and hung it from the ceiling, the concept just kinda built around that. The place we shot, Johnny Ma Studios, is this cool warehouse next to a funeral parlour in Perth, there's this yellow parrot that lives there and mills around all the action, you might see him in the clip, if not you'll see him in the behind the scene shots for sure."