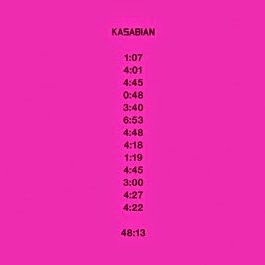 British indie rockers Kasabian have announced details of their long-awaited new album '48:13', which will be released on 9 June.

The total duration of the new album is of course 48 minutes and 13 seconds.

Speaking about the album, Tom Meighan said: "The new album, we just feel excited, it's like anything that's new, you build it up and work on it for so long. We went and recorded it in Richmond just before Christmas and we're massively excited. We took some time out, it's our fifth baby, we're more excited because we've stepped up a bit, stepped a lot up, actually."

About the nature of the art and album, guitarist Sergio Pizzorno said: "We had the confidence to be more direct, more honest with this album. I started to strip away layers rather than to just keep adding."

The full tracklisting for 48:13 is as follows:

The band have also shared a new track called "Eez-eh". Have a listen to the track below and pre-order your copy of the album here.