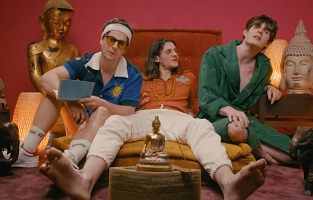 Macclesfield indie rock/pop trio Cassia have revealed the video for their new single "Right There".

The song is out today (April 20) and is taken from their upcoming EP 'Magnifier'. Grab it here.

Speaking about it, they explained: “'Do Right’ was written in Cape Town where the landscape and culture helped to sculpt the sound and inspire the concept behind the lyrics. The idea for the song was triggered by a conversation I had with my friend Jeremy out there, he described to me in such detail devastating happenings around the world and it made me realize my own lack of awareness. I didn’t know a whole lot about what he was talking about and I felt ashamed. The lyrics draw on the idea that even if you find yourself inattentive to what is going on around you, you can still make that conscious decision to positively change what is happening now. I think understanding that you aren’t yet completely awake is the first step to living a much more fulfilled life.”