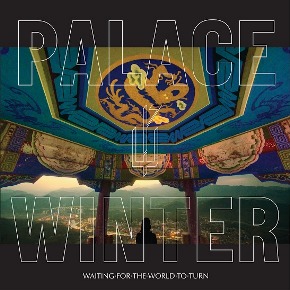 Danish-Australian indie rock/pop duo Palace Winter (aka Australian singer-songwriter Carl Coleman and Danish producer and pianist Caspar Hesselager) have announced they will release their debut LP titled 'Waiting for the World to Turn' on June 3rd via Tambourhinoceros.

The follow up to the duo's critically acclaimed 2015 EP 'Medication', was produced by Caspar and Carl Coleman and mixed and mastered by Caspar at his studio Pinligtavshed in Copenhagen. Crossing indie, psych, country, motorik, melded with electronics, the LP "is an intense, raw and rousing nine track collection."

The duo are also streaming their new single "Positron".

About the new record and the single, Caspar Hesselager says: When you’re sleeping you’re at your most vulnerable as the mind wanders off while your body stays put. It is a feeling of the world standing still, and you’re just lying there waiting for it to turn.

We’ve been locked away in the studio just the two of us for a large part of 2015 making this record and we are extremely excited to finally be sharing the first track. "Positron" is a positive upbeat tune with an underlying darker theme which is expressed in the slow nightmare-like outro of the song.

Pre-order the album here, and stream Positron below.