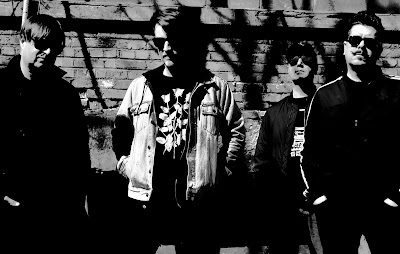 Montreal post punk/shoegaze band The City Gates have aired their new single "Hanged Drawn and Quartered".
The song is out now via Velouria Recordz and Icy Cold Records, grab it here.
The City Gates bass player and vocals’ Jean-Sébastien says about the song: “I got the idea for that title as I was reading an article on the very worst execution methods and it just stuck there somewhere in my memory.” Hanged Drawn and Quartered song lyrics is about “The most horrible way to execute someone definitely was to hang, draw and quarter the poor soul. As the name implies, you choke, stretch, gut and dismember the culprit in front of a live audience.”
“The melody came to me in the shower. I don’t know why, but melodies always seem to appear by magic once I’m in there! Anyway, I jumped out of the bathroom, ran into my home studio and laid the basics tracks for the song in an hour or so. The lyrics reflect the twisted ways we torture ourselves with daily drama and unresolved issues and the suffering it brings.”
To promote their 'Age of Resilience' album, released in June 2021 the band will embark on a European tour from October 6 to October 11, includes shows with Golden Apes, She Pleasures HerSelf, Days of Sorrow, and more.
EUROPEAN TOUR 2022
OCT 6: Wroclaw PL - Return To The Batcave Festival
OCT 7: Berlin DE, Slaughterhouse %
OCT 8: Cologne DE. Blue Shell *
OCT 9: Holzminden DE, Horstberg 76 *
OCT 10: Liège BE, Le Garage Creative Music *
OCT11: Paris, FR, Supersonic *
Listen to the track below.