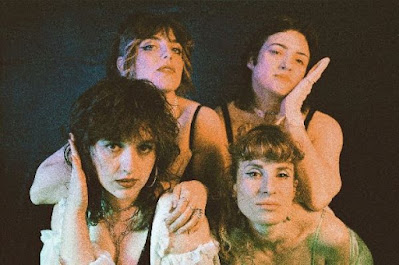 London-based international punk quartet Ghost Car have premiered the video for their new single "Selfish, Spoiled".
The song is taken from their upcoming debut album ‘Truly Trash’, set to be release on October 28th via One Little Independent Records. Pre-order your copy here.

Speaking about it, the ban said: “we’d definitely found our groove writing together collectively, this one’s about that person in the creative industry (I’m sure everyone knows someone) who is so overly privileged getting pay outs from their mega rich parents, while other artists from working class backgrounds have to work so much harder for any type of ‘exposure’ while doing their day job. 16% of people in creative jobs come from working class backgrounds according to PEC”.

Ghost Car worked closely in the making of the satirical video with art director Claudia Torán who tells us; “The story behind the video is that dinner guests played by the band represent ‘the system’ itself, (politicians, bourgeoisie, etc. portrayed in an exaggerated, ironic, sarcastic way) whilst ‘enjoying’ what appears to be a lavish dinner party. With fake attitudes and ungrateful behaviour. They don’t want to face any problems or injustices. Only interested in their egos. It’s later revealed that the dinner party, like ‘the system’, is rotten. Nothing is what it appears to be. Everything is now chaotic and the characters destroy everything, transforming into crazed guests, challenging the camera, trying to get the message through “will you ever open your eyes?”

They continue; "This feels particularly relevant in the current climate, in recent times what feels like a nationalistic fervour has been unleashed. An oppressive media imposes its own narrative, and doesn’t reflect a country where millions of people are not able to eat and heat their homes.”