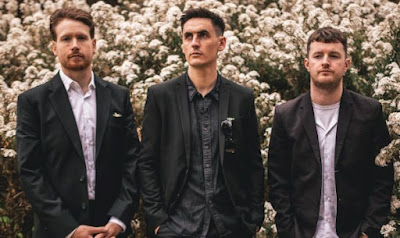 The song is taken from their their forthcoming album 'Sucker For Stars', which is set for release on the 14th of Octobe via The Burma Music. Grab it here.

The band takes its name from The Burma Steps in Cobh, Co. Cork, Ireland. Its members are  Tony O’Donovan (on vocals) and Peter Piggott (on guitar) who are both from Cobh as well as Cian Doherty (on drums) who is from Doolin Co. Clare. Drawing inspiration from The Strokes, Tame Impala and Daft Punk, the band has created a signature sound comparable to Glass Animals, MGMT and Foster the People.

‘Hard to Say’ is an anthemic, young-hearted single that expresses the spirit of causeless rebellion and the invincibility of youth. Exchanging rules for raw excitement, thrashing riffs and hammering drums push to the limit. The single is a heart-racing rush of memories, captured in flashes of polaroid-perfect choruses. After all, the young are taking over the world, and The Burma is showing them the way one rowdy lyric at a time.

The Burma gives us insight into the single: “We wrote ‘Hard to Say’ in our late teens/early twenties. There's youthful angst evident in the lyrics. Our love for this song is demonstrated by the fact that it made it on to our new album,  despite being a song from our formative years as a band. It's an explosive song that has never left our live set since the first time we played it.”