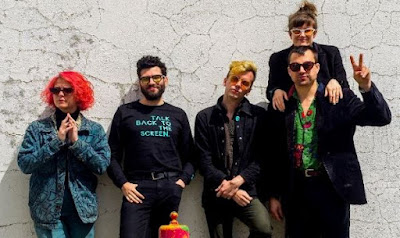 New York art-rock/punk band BODEGA have dropped the video for their new single "The Art of Advertising".
The song is part of our current playlist and is taken from their forthcoming second full-length album 'Broken Equipment (Xtra Equipment)', out today, July 15th, on What’s Your Rupture?​. Get your copy here.
Xtra Equipment boasts eight new bonus tracks from the Broken Equipment sessions, and comes ahead of the band’s summer North American headline tour beginning next week. Much like the songs on Broken Equipment, BODEGA made these tracks extra breezy and hooky as well as more philosophically ambitious than their previous recordings.
“Even when in the mode of social critique, I personally tend to think of my songwriting as more literary than analytic but here, the ‘The Art of Advertising’ and ‘Art and Advertising’ diptych functions as a sort of pop rock treatise on the subtle but crucial distinction between art and advertising (’Art creates cosmos’ whereas advertising ‘surface(s) status quo’),” says the BODEGA’s Ben Hozie.
For the accompanying lyric video, the band found inspiration from Godard, who, in the 80’s, said he’d fall asleep at the cinema during pre-film and trailer advertisements, later wake up and not be able to tell whether he was watching the feature film or the advertisements. Ben elaborates: “Today you can thumb through any magazine and find it hard to tell what is an ad and what is an article. All music videos (even the extraordinary ones) are essentially advertisements for their respective songs. Here, me and Nikki [Belfiglio] adopted the lyric video genre to playfully illustrate the various ways advertising is always (for better and worse) present in our apartment (and in BODEGA). Dissolves between shots in movies typically signify that time has passed but with screens and advertisements ever-present in our lives, our minds are always experiencing time in hazy ways.”
Watch/listen below.