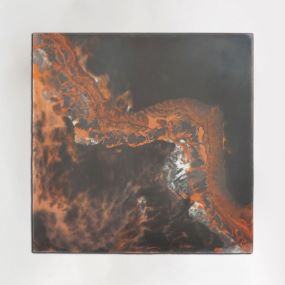 The follow-up to 2019 debut album No Sense No Feeling, will be out on September 9h via DAIS Records. Pre-order your copy here.

Formed in 2016 from the ashes of some of the UK’s best hardcore bands (Dirty Money, Tremors, DiE, The Smear), High Vis maintain a hardcore energy in their live shows – it’s not uncommon for cheerfully miserable, gold toothed vocalist/front person Graham Sayle to come away from a show with a bleeding forehead – but they’ve taken their aural cues from older UK bands like Gang Of Four, Crisis, Joy Division and Stone Roses. The intensity and passion of hardcore still stokes their fire, but in its post-punk inspired textures and moods lay a sonic adventurousness which suggests the members of High Vis are never going to be confined by any notion of what they should or shouldn’t be playing.

Blending sees them open their viewfinder wider than ever before. Alongside longstanding favourites such as Fugazi and Echo and The Bunnymen; Ride and even Flock Of Seagulls were shared reference points as the band worked on the album together.

Lyrically, the album represents another leap forward too. Talking frankly about poverty, class politics, and the challenges of everyday life, Sayle’s lyrics have always addressed the downtrodden and discarded communities across Britain slipping below the waterline. This time around, Sayle’s lost none of that social consciousness, but he’s looked at himself and his own emotional landscape, and in the process created something that feels more universal, that reaches a hand-out to people and ultimately gives a message of hope.

“To me, the lyrics are less selfish,” he reflects. “In the past, I couldn’t see past whatever was going on with me. It’s about accepting things and being open to conversations and learning to talk to people rather than just thinking that we’re all doomed.”

“The message of the album is you’re not who you're told you are,” Sayle summarises. “You’re not your class background. Whatever it is, you’re not that. Don’t resign yourself to thinking you can’t be this and you can’t be that.” It's a vitally important message right now, and one that could be the motto for not only Blending, but for High Vis themselves.

It's a kaleidoscope of influences perfectly encapsulated in anthemic new single 'Fever Dream' whose baggy groove and chiming guitars belie an existential exploration of the summer. Guitarist Martin Macnamara explains:

"'Fever Dream' was written during the hottest days of summer and is about a kind of existential aimlessness that is at its best and worst during that time of the year - when it's easy to feel more alive, but the longer, empty days can do bad things to overactive minds. Musically it walks a narrow line between that sense of hope and despair but emphasises the former by nodding towards a baggy, swirling Northern sound."

'Fever Dream' comes accompanied by a video - directed by Simon B. Wellington - that perfectly captures the nostalgic haze at the track's core. As Wellington offers: "The video for ‘Fever Dream’ was shot over the course of three years and assembled as a kaleidoscopic document of the highs and lows of life as a band. Through intimate studio, tour and live footage we were aiming to capture the essence of a band bridging the gap between nostalgic reflection and a newly realised optimism. It’s the sound of summer in the capital; chaotic nights blending into aimless days."

Check out the album's tracklist and watch the video for "Fever Dream" below.