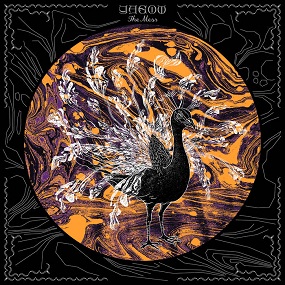 German psychedelic/space-rock/krautrock trio YAGOW have announced the release of their sophomore studio album 'The Mess'.
The 7-track record will will be available on June 18 through Crazysane Records featuring their new single "Rise & Shine". Pre-order your copy here.
From the band: "The song is about the conscious or unconscious assumption of certain roles within our capitalist society that are expected from us and about how we have been socialised to adopt them and to  perfect that facade. When Pascal and Tobi from Keine Zeit Medien came up with the idea to recreate a teleshopping program in the style of the 90s for the first video single and to have every band member present a trashy product, we knew that this would go perfectly with the message of “Rise & Shine!“ With the support of some friends who, in contrast to our amateur acting, turned out to be near-professional actors, the shoot was a lot of fun. And when Pascal, in his role as our hair model, said that he would be willing to do everything for the sake of art (“Mach mir einfach die Halbglatze!“), it was clear that the video was going to be killer! See for yourself!"
Combining the resonant riffing of The Black Angels, Kyuss, True Widow, Spacemen 3 with the celebrant atmosphere of Dead Skeletons "The Mess" presents an eclectic mix of psychedelic rock, kraut, garage rock and stoner rock.
The Mess takes you on a drive across a desert wasteland in a big old rust bucket of a car — with sunglasses on and your head bobbing to the music of the bumps in the road. YAGOW set a timeless mood that transports you away from the meddles of everyday life and into higher spirits.
Check out the album's tracklist and watch the video for "Rise & Shine" below.
The Mess Track Listing:
01. The Mess
02. Doomed To Fail
03. Rise & Shine
04. Bloom
05. Tres Calaveras
06. Eclectic Electric
07. Getting Through - is this where the magic happens?