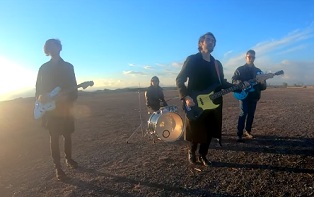 Chilean indie rock band Soone have premiered the video for their new song "Change Your Ways".

"Soone was born at the end of 2018, when Lucas Martinic decided to look for a sound capable of reflecting his inner thoughts and feelings, resulting in a mixture of eighties and nineties influences which date from his childhood years, his parent's record collection. After a brief composition period, Lucas seeked the assistance of friends he has known during the five years he's lived in Santiago: Cristian Escobar on drums, Bruno Jorquera and Julián Salas on guitar. Soone's sound then shifted into a more collective one, as it is no longer a reflection of just one person's thoughts."

The video was directed by Oskar Videla. Check out below.