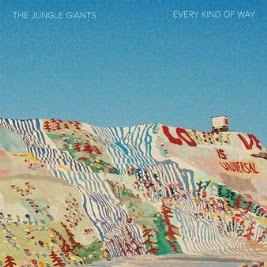 The song is the first taste from the band's forthcoming sophomore album, and the follow up to 2013's ‘Learn To Exist’, which is due for release early August 2015.

About the track, the band said: "‘Every Kind Of Way’ shows a band that is completely confident in its sound. This time around we’re much more comfortable with recording and went in thinking we’d just try everything we wanted to try. It was a little chaotic and messy, but we felt like we could do whatever we wanted and no one could tell us otherwise."

Recorded in a makeshift studio inside an old Queenslander in rural South East Queensland, The Jungle Giants have worked with producer Magoo once again.

"Every Kind Of Way" will be out on 10 April through Amplifire Music, and is available for pre-order and stream here.