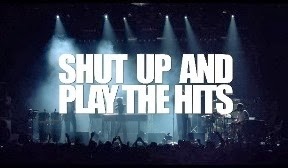 LCD Soundsystem's final show took place at New York's Madison Square Garden in April 2011, and was documented in the 'Shut Up and Play the Hits' film. Now, James Murphy has confirmed a live album of the show next year.

And finally, Jesus, the fucking live album. It’s killing me. That’s been just murder... I mixed it significantly differently than the film [Shut Up and Play the Hits], because the film is mixed for your eye and the record is mixed for your ears... It was like the concert happened, and then I spent the next year and a half fucking with it. I was like, “I’m done! Ah, shit. I gotta go deal with the fucking movie.” I had to do Shut Up and Play the Hits, and dealing with the live footage, and mixing all the sound for the live footage, and then I had to do the whole four-hour concert and edit all that footage and mix everything. It was great, but also, like, shitting hell. It really just refused to die. I guess somebody else would just have someone else deal with the movie, but I'm an idiot and wanted to mix all that audio.

It is expected to be released in early 2014.

Watch the band performing "Dance Yrself Clean" from 'Shut Up and Play the Hits' below.