THE BARBARELLATONES - Band of the Month August 2013 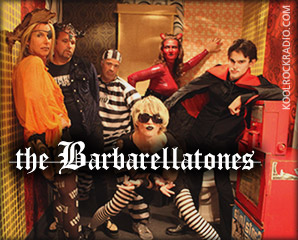 The Barbarellatones are a Glam-Rock band with just a dash of Gothabilly, from the sewers of Hollywood. Sounding like the illegitimate love-child between Bowie and The Cramps.

The Barbarellatones are sleaze-rockers and fun but also write dark ballads that tread waters into Goth and Psychedelic genres. Often with a flavor of B-Movie-ism, The Barbs are campy and some have said they remind them of Rocky Horror and certainly the 70's...kind of retro-fabulous for lack of a better term. With their gothabilly sound and humorous lyrics, they definitely poke fun at themselves and the goth scene.

The band are currently half way thru their new album 'Fake English Accents' with a bunch of new songs, some of which are being played right here on Kool Rock Radio.