'The Stone Roses: Made Of Stone' Documentary To Be Released In June 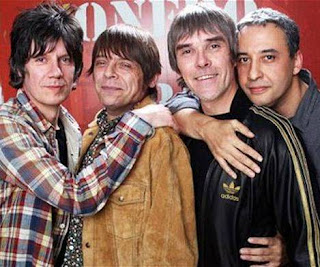 The Stone Roses documentary 'Made Of Stone' will open in British cinemas on Wednesday 5 June following a premiere in the group's hometown on Thursday 30 May.

The film was made by This Is England director Shane Meadows and goes behind the scenes on the Manchester band's 2012 reunion, from the early stages to their celebratory hometown gigs at Heaton Park.

The event will be satellite-linked to 100 cinemas as part of nationwide preview screenings running concurrently with the premiere launch, with tickets for both the host venue and the satellite-linked cinemas made available to the public.

A premiere for the film, with all members of the band in attendance, will take place in Manchester on May 30 with a number of fans who attended last year's Warrington Parr Hall and Heaton Park gigs who are featured in the film receiving tickets to the premiere in Manchester. Images of the chosen fans will be posted on the film's official Facebook and Twitter pages in the coming weeks.

"Making this film, I got to be part of something truly remarkable, the double decade awaited ‘resurrection’ of my all time favourite band, The Stone Roses," said Meadows.

"People say that you can’t recapture your youth, it’ll never be the same second time round etc, but that’s utter rubbish. The Roses were never allowed to reach their peak first time around so, as far as I and millions of fans around the world were concerned, with this comeback the Roses could be even greater." He added.