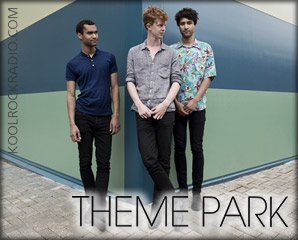 Theme Park began in earnest as a studio project when the brothers returned from university. Oscar was still a student in Leeds during the recording of the album, and became used to writing essays after gigs in Travelodges around the country. The band released their debut single 'Wax'/'A Mountain We Love', on Transgressive offshoot ParadYse in August 2011. The following day, they performed their first ever live show at London’s Lexington. Despite a late start to live performance the band have been making up for lost time, touring the UK with Two Door Cinema Club, Bloc Party and Bombay Bicycle Club, as well as opening for Florence + The Machine at Alexandra Palace.

Many songwriters talk about the need to be sad or angry or heartbroken in order to access their muse. Miles Haughton, singer/guitarist for the band, is quite the opposite. "I find it interesting that people can write when they’re sad," he says. "I write when I’m in a wave of happiness and euphoria because I want to share the feeling. I’m looking for the moment where you find something that’s so great you want to loop it around, get up and dance to it. You’re happy because you’re dancing and you’re happy because you wrote it – it’s a double hit of happiness."

Theme Park will release their eponymous debut album via Transgressive Records on February 25th. Produced by Luke Smith (Foals, The Maccabees), this follows a series of single releases and extensive touring throughout 2012, which gained the London 3 piece a wealth of fans and supporters in the lead up to the full album.