THE NOVEMBER FIVE - Band on the Month November 2012 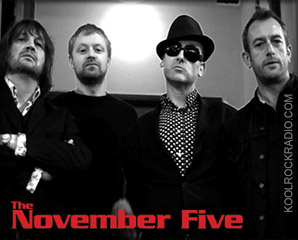 London-based rock'n'rollers The November Five have just released their debut album, "If You're Satisfied You Are Dead",  a passionate and furious riposte to the spurious notion that we should "Keep Calm and Carry On".

In an age where the good are turned bad and the blameless are demonised, these are anthems for the austerity that tackle head-on the desperate and savage times we find ourselves in.

Inspired as much by the sound of your neighbours arguing at 3 o'clock in the morning and the wailing of sirens and the crashing of doors in a dawn raid as they are by their musical heroes, The November Five create a rock'n'roll noise that's made when MENSA collides headlong into ASBO.

Comprise by Joe Cribbin (Vox/Bass), Chris Maciejewski (Guitars and Keyboards), Julian Marszalek (Guitars and Vox) and George Phillips (Drums and Percussion), The November Five are as mad as hell and are asking the right questions. And they want you to get mad, too. Because if you’re satisfied… well, we all know the answer to that one.

The November Five's first two singles, 'Closure' and 'Awake in a Daze', received international radio support from stations as varied as Kool Rock Radio,  BBC 6 Music, Xfm, Radio 1, LA’s KROQ and others across Europe and South America. "If You’re Satisfied You Are Dead" delivers on their promise.

The album was co-produced by The November Five and Brian O’Shaughnessy whose previous production credits include Go-Kart Mozart, Primal Scream and My Bloody Valentine.

"If You're Satisfied You Are Dead", will be out on November 5, 2012. You can pre-order your copy right now on eBay or iTunes. 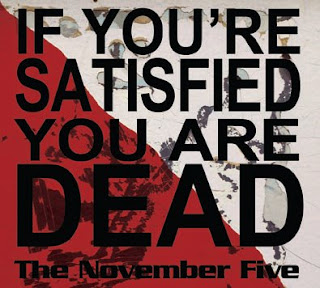 "If you like the incendiary music of The MC5, The Stooges, The Birthday Party, Jim Jones Revue or The Cramps then you will not be disappointed in the slightest." Shindig magazine

"The November Five combine the driving sneer of Earl Brutus, some of the atmospherics of the Arcade Fire if they weren't twig-stroking Canadians, and some very British bombast - in The November Five's hands, guitars do, very much, squall." The Quietus

Email ThisBlogThis!Share to TwitterShare to FacebookShare to Pinterest
Etiquetas: If You're Satisfied You Are Dead, Kool Rock Radio, KoolRockRadio, The November Five