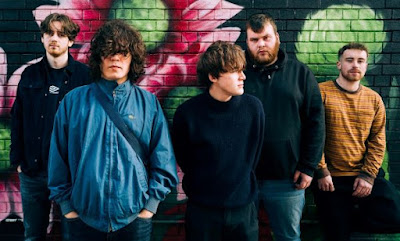 British indie/brit rock band Pastel have unveiled their new single "Escape".
The song is taken from their forthcoming second EP 'Deeper Than Holy', which will be available  in September via Manchester indie label Spirit of Spike Island. Get it here.
Escape was recorded with producer J. Fender, the frontman of fellow Manchester rising stars Afflecks Palace and the founder of both bands’ record label, Spirit of Spike Island. It was mixed by James Kenosha and then mastered by John Davis (The Killers, Foals, IDLES) at Metropolis in London.
The feeling that Pastel have emerged fully formed is amplified by ‘Escape’. Coming across like a modernised missing link between the sprawling psychedelia of early Verve and the spacious shoegaze of Ride, ‘Escape’ constantly grows in stature. Yet frontman Jack Yates’ voice is never submerged by the wall-of-sound guitars, allowing the band to keep an anthemic edge to their heavyweight soundscape.
Jack says, “This is a song mindlessly written after a weighty acid trip… ‘She melts in your mouth’... You do the maths.”
J. Fender also filmed the accompanying video for ‘Escape’, which opens with Jack crossing the Humber Bridge before he’s joined one-by-one by the rest of the band. This footage is interspersed by clips of their day at Knebworth Park captured by Sophie Sandor, which includes meeting the Stone Roses legend John Squire. The 9mm gives it an immediately nostalgic vibe, providing evocative flashbacks to Woodstock and Spike Island, but capturing at one of the biggest live music events of 2022.
Watch/listen below.