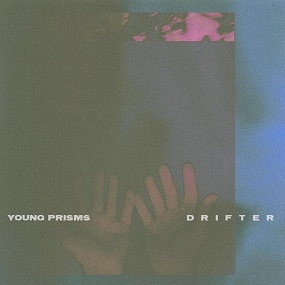 San Francisco shoegaze band Young Prisms have announced the release of their third studio album 'Drifter', their first in 10 years .
The follow-up to 2012's In Between, was produced by Shaun Durkan (Weekend, Soft Kill) and will be out on March 25 through Fire Talk. Pre-order your copy here.
Drifter is a record that finds steadiness in the embrace of uncertainty. Young Prisms have always delivered stories that have remained mostly shrouded in a dreamlike state, the kind of dreams where you never quite get to where you’re aiming to go, and the ones which unravel in melancholy when you open your eyes and reality sets in. With their first new music in ten years, the band explores the tension and release that comes with bringing your head down from the clouds and making sense of the tangible entanglements that make up everyday existence. "You’ve spent your whole life wondering if you’ll ever live up to your own expectations, but one day realize that it’s ok to just be a normal, boring human. You’re used to running away from life because you hate yourself and now you are pleasantly surprised by a new feeling to let go and accept yourself,” explains lead vocalist Stefanie Hodapp.
Speaking on the inspiration for the single, vocalist Stefanie Hodapp says, "Growing up, my grandmother would tell me that honeydew was her favorite melon. I was never fully convinced. I usually preferred cantaloupe and quite frankly thought she was full of shit because everyone knows cantaloupe tastes better. Clearly this was more of a pitch to her unwilling granddaughter. 'Honeydew' (the song) is about looking back on life and wishing for more, as if it wasn’t right or good enough. Hoping for a time machine to change history. Somehow that stubborn grandmother analogy makes sense now. A honeydew life won't ever be a cantaloupe life, but it's okay and can be just as satisfying if you accept it for what it is."

Drifter is the greater sum of its parts - a collaborative effort with all of the members contributing songwriting credits. Inherently, it represents a reprise, a second chance to present a full-formed vision that results in the band’s purest pursuit yet.
Check out the album's tracklist and watch the video for their new single "Honeydew" below.
Honeydew Tracklist:
01. Above Water
02. Yourside
03. Honeydew
04. This Time
05. Violet
06. If Ever Now
07. Melt Away
08. Outside Air
09. Self Love
10. Months Ago
11. Around
12. Flight