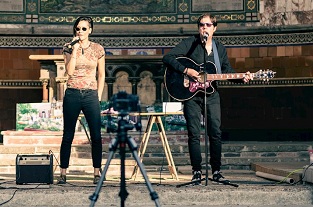 South London avant-garde/post punk band x-blu have aired their debut single "Fear".
The band formed at the beginning of this year in Thamesmead, SE London and are influenced by The Velvet Underground, Joy Division and Doves.
In this short space of time, the band have already built a reputation for passionate live performances and the innovative use of digital media. They are a band from diverse backgrounds and equality and diversity are at the heart of their ethos.
x-blu are Gary Parker (guitar, key boards, vocals and production) Dani Tagen (vocals, production, and creative director) and Sybil Mayard (vocals, keyboards, production and digital director).
Whilst encapsulating Punk, Soul and Electronica they are a digital media band working in visual art, film, music, poetry, live performance and video. This is their debut single 'Fear'.

The song is out today (November 19). Get it here and take a listen below.