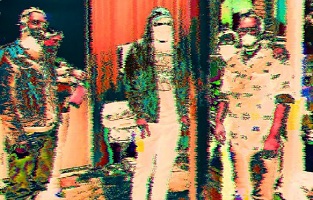 Texas indie rock/psych/shoegaze four-piece Roadkeeper have shared the video for their their politically charged single "Enemy Mine".
With a blend of shimmering psychedelic guitar, assertive synthesizers and melodic vocals, ‘Enemy Mine’ tells the story of young people vulnerable to far-right radicalisation. It encompasses everything that Roadkeeper are about.
Roadkeeper on the meaning behind the track: "The lyrics to Enemy Mine were written about the far right radicalization of vulnerable young people in the US by white nationalist professional pundits who are fed viewers and readers by algorithms on social media and YouTube. There is an organized effort to convert impressionable young people into radical white supremacists and encourage them to undertake radical action against marginalized people and progressive political movements. Enemy Mine is about the dissonance between the perceived realities of radical white supremacists and that of everyone else."