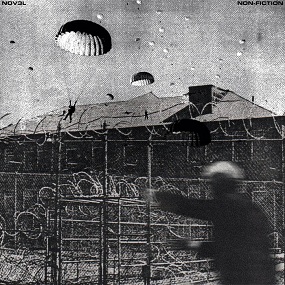 Vancouver new punk/post-punk band NOV3L have announced the release of their debut studio ‘NON-FICTION’.
The record was produced by Crack Cloud’s Bryce Cloghesy, and will allegedly tone down some of the more militantly mechanical aspects that came jutting out at you on that release in favor of a more carefully constructed and nimble procession of sound. It will be out May 28th via Flemish Eye Records. Pre-order your copy here.

NON-FICTION features music written between 2017 and 2020 by lead vocalist Jon Varley and functions as a treatise on modern existence and the perverse parameters within which it’s experienced. It’s a collection of agile, carefully-constructed post-punk, new wave and funk that’s been zapped and warped by an opioid overdose crisis, mental illness, populism, and the merciless onward march of time. NON-FICTION is dark and occasionally danceable, a macabre late-capitalist disco under a pall of confusion.
The title NON-FICTION couldn’t be a clearer statement of intent. This is the true story of N0V3L.