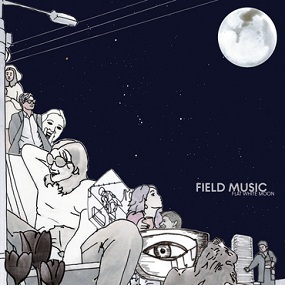 Sunderland, UK indie rock/art pop band Field Music have announced the release of their eighth studio album 'Flat White Moon'.
The follow-up to 2020's Making A New World, will be out released via Memphis Industries on April 23, featuring their latest song "Orion From The Street", and the new single "No Pressure". Pre-order your copy here.
"We want to make people feel good about things that we feel terrible about." says David Brewis, who has co-led the band Field Music with his brother Peter since 2004.
Sporadic sessions for the album began in late 2019 at the pair's studio in Sunderland, slotted between rehearsals and touring. The initial recordings pushed a looser performance aspect to the fore, inspired by some of their very first musical loves; Free, Fleetwood Mac, Led Zeppelin and The Beatles; old tapes and LPs pilfered from their parents' shelves. But a balance between performance and construction has always been an essential part of Field Music.
By March 2020, recording had already begun for most of the album's tracks and, with touring for Making A New World winding down, Peter and David were ready to plough on and finish the record.
The playfulness that’s evident in much of Flat White Moon's music became a way to offset the darkness and the sadness of many of the lyrics. Much of the album is plainly about loss and grief, and also about the guilt and isolation which comes with that.
About the new single  David Brewis says, “The song is like a mirror image of ‘Under Pressure’, but if that was about ‘people on the street’, this is mostly from the perspective of someone up on high insisting that nothing is his fault while the rest of us scratch around trying to hold things together.”
On Flat White Moon Field Music take on the challenge of representing negative emotions in a way that doesn't dilute or obscure them but which can still uplift. The result is a generous record of bounteous musical ideas, in many ways Field Music's most immediately gratifying to date.

Check out the album's tracklist and watch a video for “No Pressure”, parodies YouTube instructional videos, below.
Flat White Moon Tracklist:
01. Orion From The Street
02. Do Me A Favour
03. Not When You're In Love
04. Out Of The Frame
05. When You Last Heard From Linda
06. No Pressure
07. In This City
08. I'm The One Who Wants To Be With You
09. Meant To Be
10. Invisible Days
11. The Curtained Room
12. You Get Better