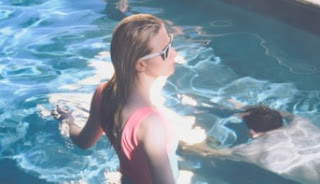 British indie pop duo Still Corners (aka Tessa Murray and Greg Hughes) have premiered the video for "Fireflies", another cut taken from their sophomore album  'Strange Pleasures', released back in May via Sub Pop Records.

The video, directed by Christian Sorensen Hansen, was filmed in Oregon's Painted Hills, a few hours outside of Portland, and features dreamy escapes with band members Tessa Murray and Greg Hughes heading down the highway on a motorcycle, and also having a relax time in a swimming pool.