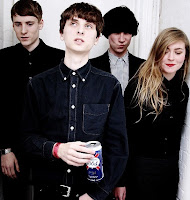 London four-piece These New Puritans have announced plans to release their third album titled 'Field of Reeds' on June 10 via Infectious Music.


The band have uploaded a video to their official website teasing the album release, with a statement that reads:

"hello people of the world wide web. we are releasing a new album. it’s called ‘Field of Reeds’. more information soon. but for now here is a short video for you to watch, love george +TNP."

Check out the band’s upcoming live dates below, including a London date at Heaven on 19 June.

In the meantime, here's a classic TNP's tune.