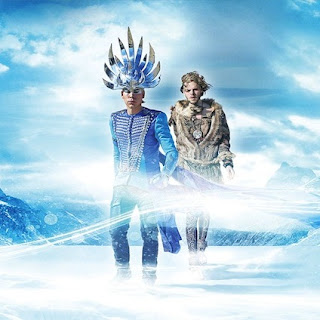 Empire of the Sun have announced via their Facebook page that they will release their long awaited new album titled 'Ice On The Dune' on June 2013 via EMI.


The electronic pairing, now referred to as "Emperor Luke Steele" and "Lord Nick Littlemore", announced their return with a teaser video called 'Discovery'. In this latest installment, according to a press release, “Emperor Steele and Lord Littlemore face an unprecedented challenge in their bid to restore peace to the world, 1,000 years into the future."

The duo elaborates further in the album's "introductory chapter":

"Once, the world was pure. It was the Emperor and the Prophet who kept it thus. Each day, they charted the sun’s course across the sky, guided rivers down from mountain peaks, brought rains to quench raging fires.

With the aid of their four priests, who possessed spirits of wild animals, they traveled the world tirelessly, maintaining nature’s delicate balance, allowing all things to grow and flourish — always with the aid of the sacred jewel held atop the Emperor’s crown…

But one night, as the Emperor slumbered, recovering from his labors, true darkness appeared. The King of Shadows, ever the bitter foe of the Empire, and all it had achieved, crept into their temple. Craving the Emperor’s power, he stole the jewel from his crown– and in an instant the world was changed.

Robbed of the bulk of his power, the Emperor and the Prophet watched helplessly as their temple was torn asunder, and their priests cast far out into the world.

But even in that moment, when all appeared lost, there was one thing that the King of Shadows’ black heart simply could not have imagined…The Emperor and the Prophet had never abandoned hope."

Check out the album's epic video trailer below. The untitled new single, you can hear a few seconds at the end of the video, is expected to be released later this month.