MANGELEXEMPLAR - Band of the Month January 2013 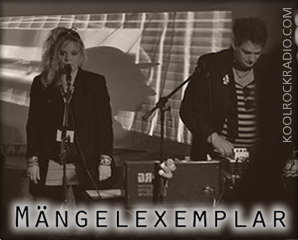 Depression is a fucking event, that is the motto of  Mängelexemplar.

They combine words into patterns of thought to which all leave space for their own interpretations. Danceable and it should be fun... but above all danceable. For their sound, they use mainly analog sound sources.

There is no box they would fit in or where they want to be. Their music is electronic, experimental, simple and straightforward. They are uncomfortable, unpleasant, honest, direct, infantile, crazy, sarcastic, cheeky, autonomous, authentic and energetic with absolute attitude - they are - Mängelexemplar.

The band's first album is called "Freizeit und Technik" is influenced by the 80's sound, and was released in October 2012 under the label KERNKRACH (hertz 036). One of our favourite songs on the album is the song "Universal" which peaked at #18 in our Best Tracks of 2012 chart.

The band are currently working on their new material "Disco - to go", which is due for release in 2013. Mängelexemplar on their new release: "There is so much to tell, for the next release we had the simple pleasure to make everything different. This idea came to us while singing and dancing in the kitchen. The sound is similar to the music from the 90s."